These reforms aren’t easy but they will unleash the potential of Egypt’s economy and serve its people, says IMF managing director 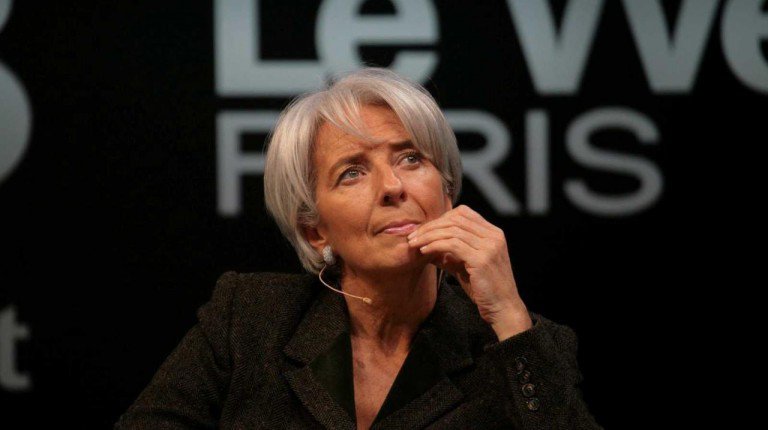 Egypt’s economy has been suffering post-2011 revolution; political instability in addition to regional security concerns have had a negative effect, especially on the tourism sector. These factors intensified Egypt’s already existing structural problems, which can be summarised into three main issues.

First, the fixed exchange rates. The Central Bank of Egypt (CBE) policy of controlling the Egyptian pound exchange rate against the US dollar had a very negative impact on the economy, leading to lower external competitiveness, depletion of foreign reserves, and foreign exchange crisis, which in turn has affected investments, and led to food shortages.

Second, the sky high budget deficit and public debts as a result of various factors, such as weak revenues, large subsidy bills that are mismanaged and not reaching eligible recipients, combined with a huge public sector wages bill. The current level of deficit and public debt is almost 100% of Egypt’s total GDP.

Finally, low growth achieved in the years following the 25 January Revolution 2011 due to structural issues which have constrained growth and job creation, in addition to declining tourism following the Russian Metrojet incident in October 2015. Egypt has failed to produce enough job opportunities to absorb the several hundreds of thousands of young people joining the work force annually. 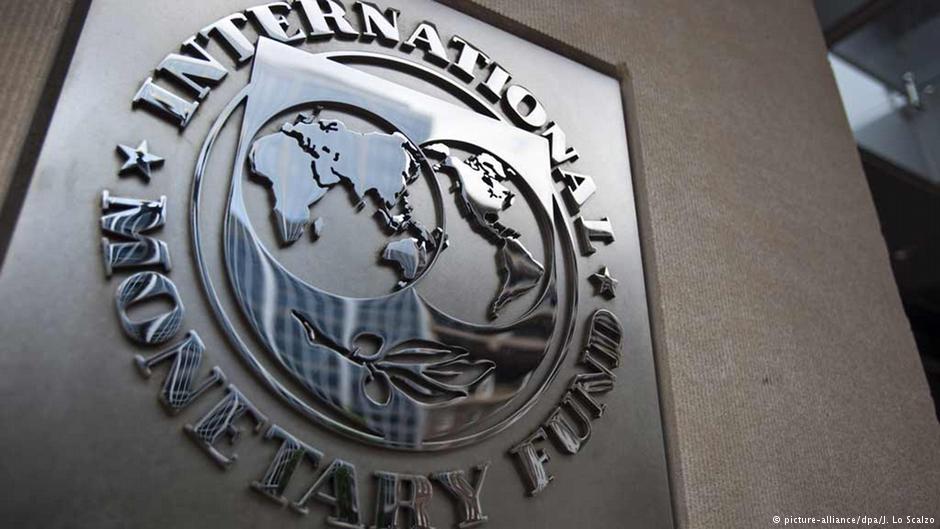 Egypt’s economic reform programme supported by the International Monetary Fund (IMF) is, according to managing director Christine Lagarde, “designed to revive growth and make sure it produces lasting changes and inclusive growth”.

The main objective of the reform programme is to restore investors’ confidence in Egypt’s economy. The five pillars of the programme are as follows:

The Central Bank of Egypt (CBE) has already floated the currency, moving it from EGP 8.83 to the US dollar to about EGP 16 on Friday. This decision will not only lead to improved competitiveness, increased attractiveness to foreign direct investments, as well as helping exports and tourism, it will also give the CBE the chance to rebuild Egypt’s international reserves.

The fuel subsidy bill for the fiscal year (FY) of 2016/2017 stands at EGP 35bn. Energy subsides are mismanaged and do not benefit the poor as much as intended. These subsides also shift production and investments towards high-energy intensive industries, rather than to labour-intensive industries.

Reducing these subsidies will free up resources that can be allocated to high-priority areas such as education, health, and social safety nets.

Reviving the economy by boosting growth

Egypt aims to improve its business climate by implementing reforms to eliminate bureaucracy, ease the required procedures to obtain licences for projects, and make finances accessible to small- and medium-sized enterprises (SME). This comes as an effort to increase job creation so as to reduce Egypt’s currently high unemployment rates.

The value-added tax (VAT), considered the cornerstone of Egypt’s economic reform programme, was approved by parliament in August, in addition to the tax disputes law, and tax administration and development plans to integrate the informal economy and broaden Egypt’s tax base. This aims to fix existing imbalances in the business community, and increase government revenues without negatively affecting the low- and middle-income brackets. The VAT includes exemptions for most staple foods consumed by low-income citizens.

One of the most important aspects of the programme is to increase spending on food subsidies, as well as cash transfers to the elderly and the poor through the Takaful and Karama programmes. About 1% of the GDP from fiscal savings will be allocated to fund these initiatives, in addition to keeping the existing school meals, infant formula subsidies, and children’s medicine subsidies. 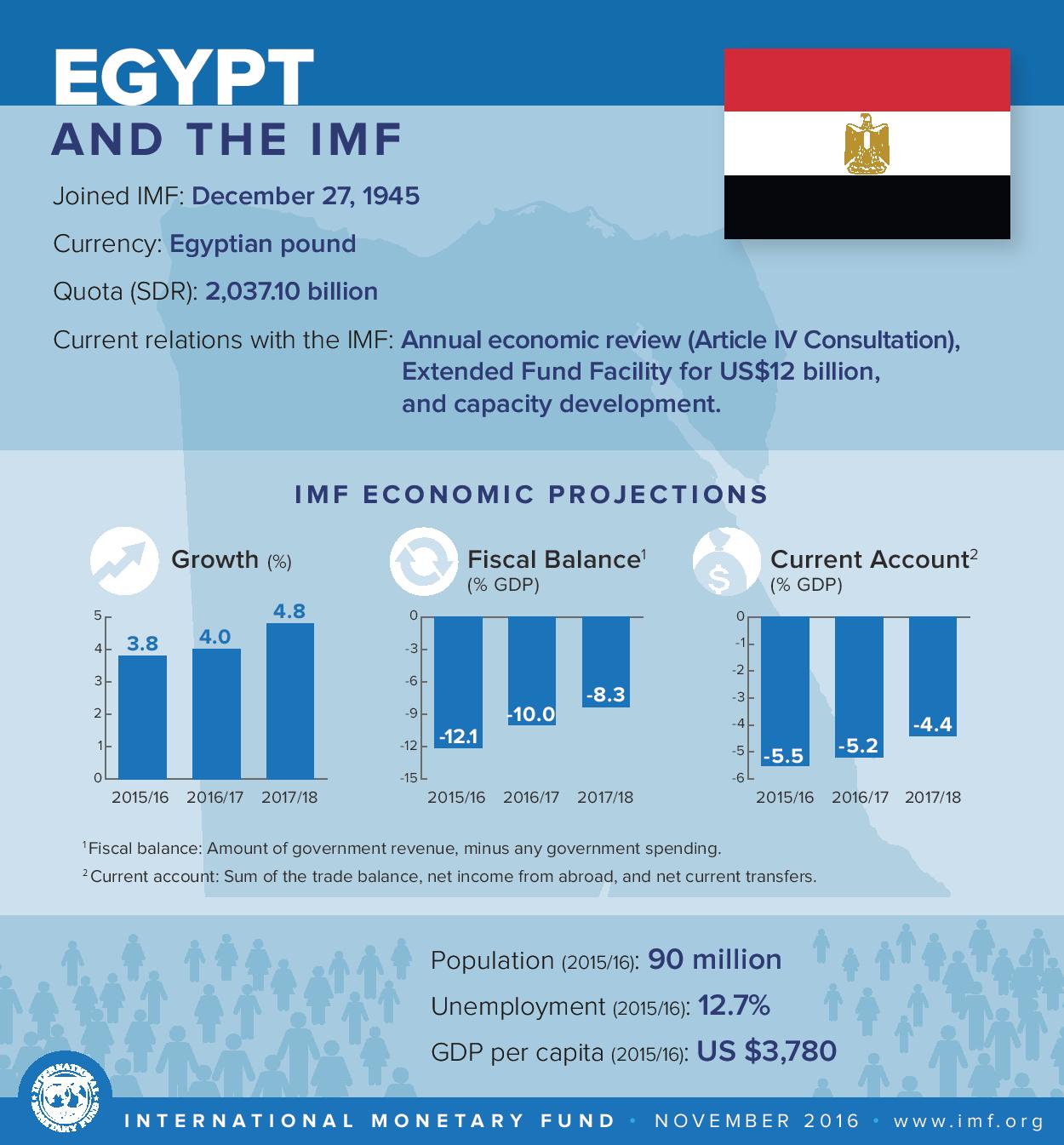 Egypt’s prospects for the future

With an efficient and effective implementation of the government’s reform programme, Egypt’s GDP growth can increase significantly to reach 6% by 2021, similar to levels during 2005-2010.

Egypt aims to achieve this result by attracting $10bn in foreign direct investment (FDI) in the fiscal year (FY) of 2016/2017, in order to achieve the government’s targeted GDP growth of 5.2% in the same fiscal year.

Egypt has immense potential owing to a young dynamic population, a large market size, a favourable geographic location, access to important foreign markets, the government’s large investments in the energy sector, in addition to the newly discovered Zohr gas field, all act in favour of Egypt’s growth potential.

On the other hand, high levels of inflation will prove to be a challenge for the government. Egypt’s core inflation rate reached 15.57% in October according to the Central Bank of Egypt (CBE). The International Monetary Fund (IMF) projects that inflation will increase to 18.2% in FY 2016/17; however, it is expected to decline sharply to 7.1% in FY 2020/21.

Egypt’s economic crisis has affected almost every social class, not only the poor. Further, the flotation of the currency lead to an almost 50% drop in its value, which, in turn, has resulted in an increase in the prices of all goods and services. But the government is keen to continue the programme, saying that Egypt can no longer afford any delays.

“These reforms aren’t easy; they will take time to generate gains and benefits. But it’s really worth the journey: implementing them will unleash the economy’s potential and will serve its people” said IMF managing director Christine Lagarde.

Lagarde emphasised that the IMF and the international community’s full support to the Egyptian authorities and the Egyptian people, through every step of the journey of reforms.

Throughout last week, the government along with the Central Bank of Egypt (CBE) specified several confirmed resources for foreign currency, which would help reach the targeted foreign currency reserves of $25-30bn by the end of 2016 previously affirmed by CBE governor Tarek Amer.

Egypt’s foreign reserves stood at $19.041bn at the end of October, according to the CBE.

Egypt has already received the first tranche of the International Monetary Fund (IMF) loan worth $2.75bn, and is expected to receive another $2.7bn from China after the currency swap agreement between the two countries. Additionally, another $1.5bn will be received from the World Bank and the African Development Bank by the end of 2016.

Moreover, Egypt offered international bonds worth $2bn in the Ireland Stock Exchange through a private placement in favour of the CBE, and will offer bonds worth $2.5bn in international markets, for which it expects to receive revenues before the end of this year.

Around 50% of the total $4.5bn gained through the bonds sale will be added to the CBE’s foreign currency reserves, while the remaining amount will be used by the CBE to repurchase international bonds worth $2bn issued by the Ministry of Finance, according to government sources.

The repurchasing of bonds is a guarantee to investors who bought bonds in the international private placement. Hence, if the Finance Ministry would not be able to repay the value of its issued bonds once they mature, the CBE will waive its repurchased bonds and repay the matured bonds to investors.

Minister of Finance Amr El-Garhy said that this step assures the ministry’s commitment to diversify the financing sources specified for the budget deficit, and to ease pressure on domestic funding sources, as well as reduce the cost of public debt.

In September, the Ministry of International Cooperation had said in a statement that Egypt will receive $500m  from the African Development Bank by the end of 2016. The ministry also noted that Egypt would receive $1bn from the World Bank before the end of the year which represents the second tranche of a loan worth $3bn.