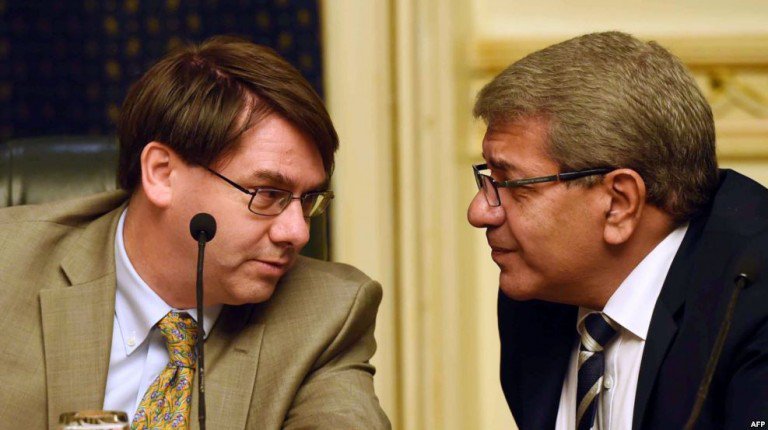 Foreign exchange and inflation rates exceeded the IMF’s preliminary predictions; IMF may have

miscalculated the foundations of the Egyptian economy

Mission chief for Egypt and advisor to the International Monetary Fund’s (IMF) Middle East and Central Asia Department Chris Jarvis discussed in a press briefing the details of the agreement between Egypt and the IMF in support of the Egyptian economic reform programme adopted by the government.

On Wednesday, Egypt’s Finance Ministry announced in a press release that the goal of the programme for 2016/2017 is to achieve a preliminary deficit of 0.8% of the GDP, which is the same target of the budget which was approved by the parliament in June.

When asked what will happen if the agreement was rejected by the parliament, he said that the IMF is well aware of the constitutional requirements and is glad that government is taking steps to achieve them, and that the agreement matches the goals of the economic reform programme.

In regards to countries that are witnessing similar conditions as Egypt and in which intervention by the IMF was successful, he explained that every country is different, but huge success was achieved in Turkey, Brazil, and many eastern European countries.

The Central Bank of Egypt (CBE) decided to float the local currency, moving it from EGP 8.88 to the US dollar to almost EGP 18. This decision will not only lead to improved competitiveness, but also increase attractiveness to foreign direct investments, as well as help exports and tourism, Jarvis stated, adding that it will also give the CBE the chance to rebuild Egypt’s international reserves.

When asked about the high foreign exchange rate and sky-high inflation rates, he answered that the IMF may have miscalculated the foundations of the Egyptian economy, and that the rates exceeded their preliminary predictions, adding that this is normal at the beginning of the programme.

“We consider the current foreign exchange rate to be the real market value, representing the value that people are willing to buy and sell with. We do not have predictions for the value of the Egyptian pound against the US dollar, but it is normal that the value greatly depreciates in the first period following the flotation,” he explained.

Jarvis explained that the CBE’s choice of bringing in money before tackling inflation was the first step to restore foreign exchange reserves and strengthen the credibility of the economy, but he believes that the CBE will shift its focus to control and gradually reduce inflation to single digits over the medium-term.

Moreover, when asked about how the government should react to the drop in the value of public wages with the increasing inflation, Jarvis explained that increases in public wages in the previous years—especially in 2013—had contributed to the unsustainable budget deficit, which in turn led to higher inflation rates, reducing the real wage value.

In regards to the condition of the second tranche of the loan, Jarvis said that the IMF will visit Egypt by the end of February to evaluate the progress achieved before releasing the second tranche in April. He added that although they do not yet have the exact numbers, the initial reports indicate that Egypt has met the benchmarks set by the IMF for the second tranche.