Egypt picked four banks to manage a dollar bond issuance planned for 2016, part of the government’s effort to raise $21 billion over three years to shore up reserves and end a crippling hard currency shortage.

JPMorgan Chase & Co., Citigroup Inc., BNP Paribas SA and Paris-based Natixis SA will oversee the sale, the finance ministry said in a statement on its website. Egypt plans to sell $3 billion to $5 billion in international bonds in the fiscal year ending June 30, with the first issuance planned for October, officials have said.

Egypt reached a preliminary agreement last week with the International Monetary Fund for a $12 billion loan program, which both sides said is designed to restore investor confidence and balance the budget. The government also plans to raise funds from bilateral creditors, the World Bank and the African Development Bank. Borrowing costs for Africa’s third-biggest economy have fallen to the lowest in a year, nearing the level of its last international bond sale that the finance ministry has targeted for its next issuance.

“The critical thing is that an IMF program is happening, and gets it toward policies which international investors like better,” said Alan Cameron, a London-based economist who covers frontier markets at Exotix Partners, adding that he expects “pretty decent demand” for Egyptian bonds. “The global context is extremely bullish because of expectations that interest rates in developed economies will remain low,” he said. 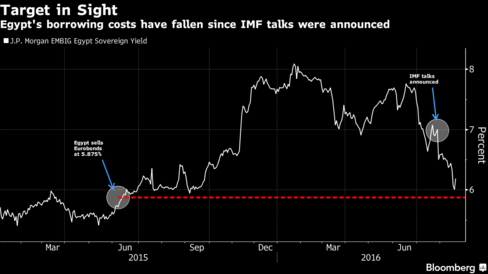 Egypt last sold Eurobonds in 2015, raising $1.5 billion, with subsequent sales postponed as borrowing costs soared. The yield on the bonds — due in 2025 — has fallen 118 basis points since Egypt made its IMF negotiations public last month, and rose 12 basis points to 6.38 percent at 2:38 p.m. in Cairo on Thursday. That compares with 4.228 percent for the Bloomberg USD Emerging Market Sovereign Bond Index on Wednesday.

Egypt can expect to pay 6.5 percent to 7 percent to sell its 10-year bonds, Cameron said.