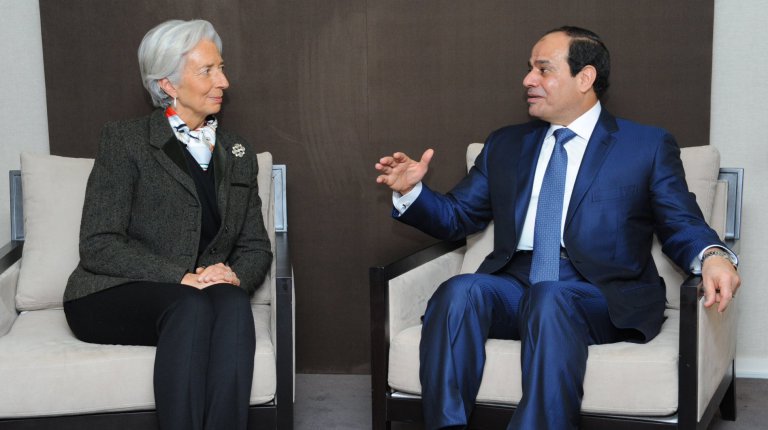 During his meeting with the editors-in-chief of national newspapers on Friday, President Abdel Fattah Al-Sisi talked about the loan that Egypt is seeking from the International Monetary Fund (IMF). This was the first time that the president tackled the country’s negotiations with the IMF, as he ensured that economic reforms will be implemented and that Egyptians will be able to bear the burdens of those reforms.

The president believes that Egyptians would be prepared to face the challenges in order for Egypt to improve.

He said that Egypt cooperated with the IMF to prepare the economic reform programme, from which the people would greatly benefit, because it aims to reduce national debt and ensure that subsidies will go to those in need.

The president noted that the IMF’s agreement to provide the loan shows that Egypt has the ability to pay it back.

Aliaa Mamdouh, a former economist at CI Capital, sees that Egypt cannot postpone the IMF loan for the third time since 2011.

She believes that the president’s statements ensure that Egypt wants to borrow from the IMF. She emphasised that unofficial words from anonymous sources in the cabinet said that the loan might not actually be granted because the government cannot apply more austerity measures. However, Al-Sisi’s statements convey otherwise, she said.

Mamdouh sees that if Egypt does not implement economic reforms now, living conditions would become even harder for the people.

Neither donors, nor funds and investors will lend to or invest in Egypt unless it implements reforms, she stated.

She believes that the country’s ability to attract investments is virtually absent, explaining that only the IMF loan would show investors that Egypt is on its way to implement economic reforms that would improve the investment climate.

Although the president said that he understands how the conditions required for the loan could affect the poor in Egypt, and that the government will increase subsidies, Mamdouh stated that the current situation will get worse, no matter what.

“I’m afraid that Egypt might not be able to complete the loan tranches if the people become angry, which will show the world that the country cannot implement the reforms and that would be the worst situation ever,” Mamdouh said.

That is why the government must be concerned about reducing the side-effects of the reforms, she noted.

Mamdouh said that if the government does not reduce petroleum subsidies now, it might be easier for the people to absorb the devaluation of the Egyptian pound.